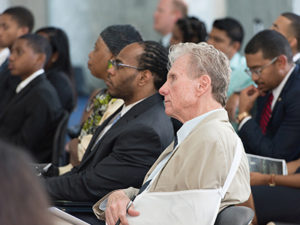 END_OF_DOCUMENT_TOKEN_TO_BE_REPLACED

[Saturday, June 1] Atlanta, GA – The Cold Case Justice Initiative at Syracuse University announces today that it is launching its Five Cities Project this summer. Its student workers will be sent into five southern cities to begin to take a full accounting of racially motivated killings that may have occurred during the period between 1955 and 1980. The cities are Atlanta, GA, Nashville, TN, Baton Rouge, LA, Jackson MS, Jacksonville, FL. Thirteen students will conduct document research and participate in dialogues in these communities to identify and find residents who believe they lost loved ones in racially motivated crimes during the civil rights era.

END_OF_DOCUMENT_TOKEN_TO_BE_REPLACED

With bipartisan, unanimous consent in the U.S. Senate last night, passage of the Emmett Till Unsolved Civil Rights Crimes Reauthorization Act of 2016 is one step closer to becoming law. The Cold Case Justice Initiative (CCJI) at Syracuse University’s College of Law and partners like activist Alvin Sykes and organizations including the NAACP, SPLC, Georgia Civil Rights & Cold Cases Project, Emmett Till Legacy Foundation, Mamie Till Mobley Foundation and the Northeastern University Civil Rights & Restorative Justice Project played an instrumental role advocating for stronger provisions and passage of the bill.

“The United States Congress took a substantial step forward, providing the opportunity for justice for the victims of Civil Rights Era racial murders and disappearances,” says Paula Johnson, professor of law and co-director of the CCJI. “Since beginning our work in 2008, we have consistently demanded the need for thorough investigations and a full accounting of those who were killed or disappeared during the Civil Rights Era and beyond. This reauthorization will do just that.”

“We appreciate that the Senate came together to pass the Reauthorization Act without rancor and division,” says CCJI co-director and law professor Janis McDonald. “It is an affirmation that this effort is the right thing to do for our nation so we want to thank the senators on both sides of the aisle who stood behind this push for reauthorization.”

The effort in the Senate was led by Senator Richard Burr (R-NC), who has worked alongside his counterpart in the House of Representatives, Congressman John Lewis (D-GA).  In addition to Senator Burr fellow Senators Patrick Leahy, Claire McCaskill and Roy Blunt were instrumental in the Senate process while Congressmen John Conyers and James Sensenbrenner have also worked on the House side.

The original Emmett Till Unsolved Civil Rights Crime Act of 2007 was scheduled to expire in 2017. “Much work remains to be done to investigate the killings and disappearances of victims of racially motivated violence during the Civil Rights Era,” says Johnson. “The Reauthorization Act not only extends the sunset provision of the original legislation, but enhances several aspects of the law so that the prospect for justice can be realized.”

The Reauthorization Act thus calls for:

“As we have seen in recent weeks, racial justice remains an imperative for U.S. society,” says McDonald. “Too often, in the past and the present, racially motivated crimes resulting in death or grave injury have been committed with impunity. The Emmett Till Unsolved Civil Rights Crimes Reauthorization Act of 2016 recognizes the importance of rectifying these wrongs and bringing perpetrators of these crimes to justice.”

“The Reauthorization Act offers the promise of justice for the families and communities who have suffered losses and lack of faith in the justice system,” says Johnson. “Now that the Senate has acted, the Cold Case Justice Initiative urges the House of Representatives to do likewise and pass the Act. The families of the victims, the communities that have been most directly affected, and the public at large demand and depend on their government and law enforcement officials to fulfill the promise that justice delayed is not justice denied. It is never too late for justice.”

This week both the House and Senate introduced a bill to reauthorize the Emmett Till Unsolved Civil Rights Crimes Act, which expires in 2017, in a bipartisan effort to continue the work begun by the Department of Justice (DOJ) in 2008. The participation and contributions of the Cold Case Justice Initiative’s (CCJI) co-directors and students were instrumental in this legislative development.

“For years now, the Cold Case Justice Initiative and the families who have lost loved ones to racial violence, and with whom we share the struggle for justice, have been pressing our government for full accountability,” says CCJI co-director Paula Johnson. “This development by the Unites States Congress is a step in the right direction, but it is only the first step in a new phase.”

“It was Dr. King who said the time is always right to do what is right,” says Rep. John Lewis. “We can never heal from the injuries of the past by sweeping hundreds of crimes under the rug.  We have an obligation, a mission, and a mandate to continue the effort required to wash away these stains on our democracy.”

“I am honored to join Congressman Lewis to introduce this legislation to make it possible for the FBI and the Justice Department to continue their important work to investigate these cold cases and bring the perpetrators of racially-motivated crimes to justice,” says Sen. Richard Burr. “Uncovering and confronting the truth about these crimes is essential to ensuring that no one is above the law and that all Americans are worthy of the protection of our laws.”

The Till Reauthorization Act includes a significant number of suggestions made by the CCJI which along with its students has been working with legislators for more than a year to ensure the push for justice and full accounting would go on. The Reauthorization allows this to happen. “I am glad to say this bill incorporates the advice and counsel of numerous individuals and groups who are also dedicated to the pursuit of justice in these matters, says Cong. Lewis.  “Their tireless efforts have helped us improve this legislation so that more work can be done to end the pain, doubt and the inconsistent application of justice that has languished unattended for decades.”

While the reauthorization will allow investigators to continue their work beyond 2017 there are also other, substantial changes to address gaps in the previous bill such as providing greater transparency in the process, higher level of accountability for the DOJ to report on its progress, and allowing cases occurring in the 1970s, 1980s and beyond to be brought to justice. “Perhaps most significantly to us is that the FBI will be required to travel to the communities to do their investigative work, not simply read over old files from a desk in Washington and make a couple phone calls” says CCJI co-director Janis McDonald. “The Emmett Till Unsolved Civil Rights Crimes Reauthorization Act reflects the realization that racial violence remains a destructive force and that the pursuit of justice has no deadline and cannot be compromised.”

The CCJI has watched recent violence, particularly the senseless violence and killings by police against citizens of color captured on camera, with a remarkable sense of déjà vu when looking at our Nation’s dark history. “The long forgotten victims of these racial crimes and their families are owed acknowledgement of their loss, accountability of perpetrators for their deaths, and gratitude by our government and entire society for their ultimate sacrifices,” says Johnson.

“As we work to address current questions about racial violence and civil rights, we should be mindful of our history and why so many in the African-American community raise the issue of black lives matter,” says Rep. John Conyers. “Passage of the Emmett Till Act represented a commitment to resolving the unanswered questions from one of the darkest periods in modern American history.  Reauthorization represents a further investment in our history and will allow the Department of Justice to resolve remaining issues and set to rest the ghost of the civil rights era.”

“Because many of these families have waited for closure 50 years or more we urge Congress to move swiftly to reauthorize the Act,” says McDonald.

July 14 marks the one-year anniversary of Rexdale Henry’s death, and the Cold Case Justice Initiative (CCJI) at Syracuse University’s College of Law continues to demand a full federal inquiry into the circumstances of his demise and delays by the State of Mississippi to release information about his death.

“These delays are inexcusable one year after Mr. Henry’s death and his family’s request for information and answers,” says Janis McDonald, a law professor and co-director of the CCJI. “The Mississippi Medical Examiner’s Office has steadfastly refused to release the official autopsy while Neshoba County officials have not released videotapes surrounding the death and discovery of Mr. Henry’s body in the Neshoba County Detention Center in Philadelphia, Mississippi, on July 14, 2015.”

END_OF_DOCUMENT_TOKEN_TO_BE_REPLACED

For years now, the Cold Case Justice Initiative and the families who have lost loved ones to racial violence, and with whom we share the struggle for justice, have been pressing our government for full accountability. Today’s announcement is a step in the right direction, but it is only the first step in a new phase.

We urge Congress to honor the bipartisan commitment it made in 2008 to address the past failure of the legal system: to identify, properly investigate the hundreds, perhaps thousands, of suspicious deaths and prosecute killers who acted during the pre-1969 civil rights era.

END_OF_DOCUMENT_TOKEN_TO_BE_REPLACED

Philadelphia, Mississippi – Following a funeral on July 19 the family of Rexdale Henry has obtained a board certified pathologist who will conduct an independent autopsy in Florida where Henry’s body is now bound. Henry was found dead in Philadelphia, Mississippi, in a Neshoba County jail cell on Tuesday, July 14, 2015.  A lifelong community activist and member of the Choctaw tribe, Mr. Henry was arrested July 9 allegedly for failure to pay an old fine.  He reportedly suffered two broken ribs at some time during his arrest or in the jail.

END_OF_DOCUMENT_TOKEN_TO_BE_REPLACED

The Cold Case Justice Initiative at Syracuse University College of Law joins all of you in honoring the victims of racial violence in Florida and across the nation.  We remember the five men – Robert Walker, Marvin Walker, Lee Roy Holloway, John Sterling, and Lonnie Merritt – “The Atlanta Five” – who left their homes and families one day to enjoy such an ordinary past-time – fishing – and encountered an extraordinary end at the hands of murderers.  We remember them because they were our sons, husbands, partners, brothers, fathers, and loved ones.  We remember them because the failure to hold anyone responsible for their deaths reminds us of the great gulf between the promise of justice and its reality, especially when it comes to African American lives in the United States.  We remember them and all the other sons, husbands, partners, brothers, fathers, and loved ones whose lives were ended and taken prematurely through racist violence that continues to permeate our society.

END_OF_DOCUMENT_TOKEN_TO_BE_REPLACED

The Cold Case Justice Initiative at Syracuse University College of Law expresses our deep sympathies to the families and community of Charleston, South Carolina‎ on the murders of their loved ones during prayer services at Emanuel AME Church, on June 17th.  It is imperative that U.S. law enforcement officials and agencies bring Dylann Roof, the alleged perpetrator of this South Carolina massacre, to justice. They must also conduct a thorough investigation to bring to justice anyone who may have assisted him in the commission of this racist crime against humanity as well.

END_OF_DOCUMENT_TOKEN_TO_BE_REPLACED

Sean Kirst Column on the Dahmer Family Struggle for Justice: 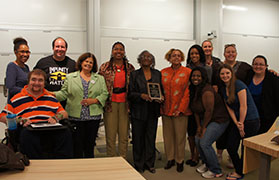